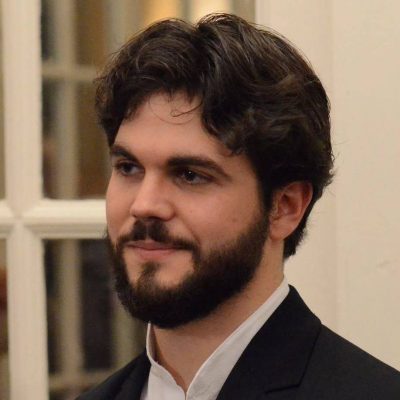 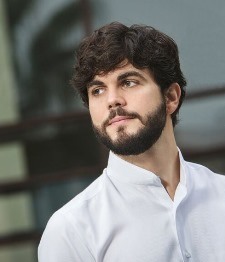 In June 2010 he was accepted at the Manuel Masotti Littel Conservatory of Music in order to complete his Bachelor studies with professor Pilar Valero Abril, who was decisive in his education. He finished the Bachelor in June 2015 obtaining “high distinction” in all the courses and he received a scholarship that allowed him to participate in the « Internationale Sommerakademie » of Mozarteum University in Salzburg.

During the academic year 2011-12 he attended the Schola Cantorum in Paris and subsequently in Coimbra to complete advanced studies with Professor Aquiles Delle Vigne, from whom he continues receiving lessons at present. During that period, he participated in the recording of a CD with works by F. Chopin, he took part in a live recital broadcast by Radio Nacional de España (June 2011) and he began to collaborate with the Murcia Symphonic Orchestra, which allowed him to get to know another exciting piano facet that he continues developing at present, broadening his vision of music and receiving advice from great conductors. In April 2013 he performed the Concerto n. 2 of S. Rachmaninov as soloist with the Elche Symphonic Orchestra conducted by Leonardo Martínez.

Throughout his career, he has performed concerts in Spain, Portugal, France, Belgium, Germany and Italy receiving reviews as follows:

“(…)Faced alone with the virtuosity of this piece, the young pianist from Molina de Segura, showed not only an ability to solve the technical pitfalls of a complicated score, but also a correct understanding of the intricate recesses through which the composer from Cadiz develops his music. At the moment, the impression cannot be more favourable. » – Octavio de Juan. – La Verdad (Murcia, 18.06.13)

“The Spaniard Vicente Prieto presented a very vibrant and sonorous Mozart, far from more static visions, with a categorical expressiveness that reached its peak in the poetic Adagio that in some moments seemed to represent a more advanced sonority. With a melodic speech full of beauty, the cheerful Allegro only con?irmed those feelings.” –  Javier Artaza. La Verdad (Murcia, 23.12.16)

Recently, he has received the 2nd Prize at the 91st edition of the International Competition Leopold Bellan (Paris, November 2017), in the 2 pianos/4 hands section together with the pianist Arturo Ruiz, with whom he forms Iberpianoduo.