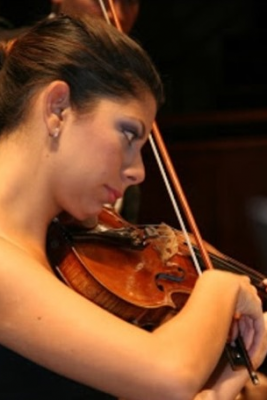 A. Khatchaturian  : Trio pour violon, clarinette et piano
D. Shostakovitch  : 5 pièces
D. Milhaud  : Suite pour clarinette, violon et piano
S. Saens  : Les violons dans le soir (Arr. par Xavier Falques pour clarinette, violon et piano)
Çağıl Cansu Şanlıdağ, piano, is accepted at the age of seven in Dokuz Eylul Conservatory of Izmir in the class of Prof. Aykut Yafe. In order to perfect her playing, she worked under the direction of Gulsin Onay, Kemal Gekic, Francesco Libetta and Ilya Itin before arriving in Europe, where she has been accepted in the classes of Dalia Ouziel and Aleksandar Madzar at the Royal Conservatory of Mons and Koniklijk Conservatorium Brussel in which she graduated as a soloist pianist with a distiction degree. At the same time, she deepened her knowledge of the repertoire with Michel Béroff.

During her studies, she distinguished herself by her passion for the Lied and was admitted to the International Masterclasses Udo Reinemann and Académie des heures romantiques, which allowed her to work with Anne Sophie von Otter, Julius Drake, Mitsuko Shirai, Christianne Stotijn, Dietrich Henschel, Valérie Guillorit, Eildert Beeftink, Marie-Claude Solanet, Markus Hadulla and Dorian Astor. At the moment, she is following a postgraduate degree in accompaniment of lied at the University of music and performing arts Vienna in the class of Markus Hadulla. – Çağıl Cansu Şanlıdağ has performed in concerts across Europe as well as in Turkey and Uruguay, both as a soloist and chamber musician.

Carlos Escalona, clarinet – He began his musical studies with Alan Troudart in Venezuela, where he was formed into the National System of Youth and Children’s Orchestras and Choirs of Venezuela which is a state-funded organization created in 1975 by the Venezuelan maestro José Antonio Abreu with the idea of systematizing music education and promoting the collective practice of music through symphony orchestras and chorus as a means of social organization and communitarian development. – Later he studied in Simon Bolivar Music Conservatory, where he had the opportunity to receive lessons with the teachers Jorge Montilla and Mark Friedman. He was also part of the Latin American Academy of Clarinet directed by Valdemar Rodríguez. In this academy  he received lessons from the teachers Edgar Pronio, Jorge Montilla, Gorgias Sánchez, Carmen Borregales, Henry Crespo and Valdemar Rodríguez. – He has participated in seven Young Clarinet Festivals held by the teacher Valdemar Rodríguez, where he obtained the first prize of two competitions within the framework of this festival, IV and VIII editions, performing  Mozart and Jean Francoix clarinet concertos. – Escalona had the opportunity to receive master-classes with teachers such as: Anthony Pay, Eddy Vanoosthuyse, Antonio Saiote, Robert Spring, Ronald Van Spaendonck, Philippe Cuper, Luis Rossi, Walter Seyfarth, Eents Ottensamer, Alessandro Carbonare, among others.

Between 2005-2017 he was a permanent member of Simon Bolivar Symphony Orchestra of Venezuela, where he had the opportunity to be under the baton of  the such conductors as: Gustavo Dudamel, Claudio Abbado, Sir Simon Rattle, Guiseppe Sinoppoli, Zubin Mehta, among others. He also had the opportunity to make several international tours conducted by maestro Gustavo Dudamel. – During 10 years he was member of the Trio de Corno di Bassetto ¨Ávila¨, where he did some tours to China, England and Austria. Later he was clarinet and bass clarinet teacher at Simon Bolivar Music Conservatory, Caracas, Venezuela, the school from his childhood.

Within the framework of the Carnegie Hall festival, entitled “Voces de Latinoamérica” ​​he had the opportunity to play and premiere the works of the masters Gonzalo Rubalcaba and Danilo Pérez, in a recital called  “Música Nueva”. – During the year 2017-2018 he belonged to the Academia Nazionale Santa Cecilia in Rome as academist, where he was a permanent student of the maestro Alessandro Carbonare. – He is currently studying Master at the Royal Conservatory of Mons with Professor Ronald Van Spaendonck. He is licentiate in Music, Instrumental Execution from the National Experimental University of the Arts (UNEARTE). He is also a member of the Woodwind Quintet ¨Arcadia¨.

Daniela Becerra, violin – She was member of the first violin section of  Simon Bolivar Symphony Orchestra of Venezuela, which under the baton of maestro Gustavo Dudamel has allowed her to perform in the most important halls and festivals in Europe, Asia and America. Becerra began her musical studies in 1997, at the age of seven, at  Montalbán academic children’s center in Caracas, Venezuela, which is a music school belonging to El Sistema, “Venezuela’s National System of Youth and Children’s Orchestras and Choirs, which since its founding in 1975 has used music education as a vehicle for social change. It cultivates an ‘affluence of spirit’ which today brings hope, joy and positive social impact to 400,000 children and their families and communities throughout the country. Its founding principles include a team-based approach to collective, cooperative education characterized by trust, discipline, empathy, commitment, structure, and support for self-esteem.”

In 2001 she continues her musical studies in Simon Bolivar Music Conservatory. She was a member of the Teresa Carreño Youth Symphony of Venezuela, having the place of first violin assistant, orchestra with which she toured to Europe in 2010, under the baton of maestro Christian Vázquez. She has participated in several editions of the summer courses of the Latin American Violin Academy where she received lessons with Professor Luis Miguel González. She has also received master-classes with maestros: José Francisco del Castillo, Roberto Valdés, Yuri Namkung, Felicitas Hoffmaister, Francisco Caván, Elina Vähälä, Donald Weilerstein and Albert Markov, among others. – She performed as a soloist on several occasions in her country, Venezuela, performing the great violin concertos of Tchaikovsky, Brahms and Beethoven, accompanied by the Simon Bolívar Symphony Orchestra of Venezuela. She has done important recitals with piano in Fedora Alemán Hall, located in the Center for Social Action for Music. She has also dedicated to the chamber music, playing with string quartets where she had a great journey into the extend repertory, very important for his musical development.

In 2009 she won the first prize of the XVII National Violin Competition “Juan Bautista Plaza”, held at the Emil Friedman School in Caracas. – In 2015, 2016 she attended the summer courses “Rencontres Musicales Internationales d’Enghien” in Belgium where she received master-classes with professors Phillippe Graffin and András Keller. – She is currently a student of Shirly Laub at the Conservatoire Royal de Bruxelles. As an orchestra musician she is currently a substitute violinist at the Opera La Monnaie and a member of  Cascophil, the chamber orchestra of Belgium.