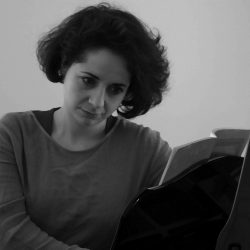 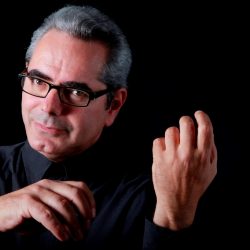 He is holding a performer’s diploma from “Athineon” conservatory of Athens and he is Associate of the Royal College of Music of London (ARCM). – He has been a member of the famous “Bach Orchester” under Carl Richter for two years.

His artistic activities have expanded in various directions: solo, chamber music, orchestral leading, orchestral conducting and teaching. He has performed in many concert halls all over Greece as well as abroad (France, Swiss, Italy, Turkey, Ukraine, Serbia, Great Britain, Germany, Bulgaria, Austria, USA and Rumania) both as a soloist and as a principal musician participating in different chamber ensembles.

He is a founder member of the “OPUS I” piano trio with which he concretizes often all over Greece. – His great interest for young people has been expressed by many special concerts for children all over Greece and with programs that include lectures and seminars, open lessons and discussions about musical understanding and appreciation as well as introduction for very young children to music.

Dimitra Mantzouratou was born in Athens, Greece. – She started her studies at the Hellenic Conservatory in Athens and obtained her piano diploma with the highest distinction. During that time she followed theoretical studies and obtained the harmony, counterpoint and finally the fugue degree with distinction.

For three years she studied piano at the Royal Flemish Conservatory of Brussels (class of Daniel Blumenthal) with a scholarship of the State Scholarships Foundation of Greece (I.K.Y.) and received the Master’s degree.

She holds a degree and a PhD in Musicology from the National University of Athens.  – She has followed many masterclasses (with P. Badura – Skoda, B. Ringeissen, M. Tirimo etc.) and participated twice in the Mozarteum summer courses in Salzburg (class of S. Dorensky and J. Lateiner).

She teaches piano at the Ilion Music School of Athens. – She has premiered many solo and chamber music works by Greek composers.