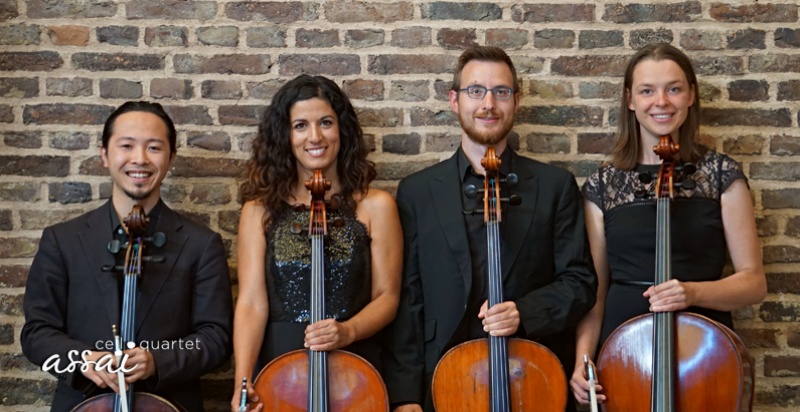 Founded in 2013, the ASSAI cello quartet was born out of an initiative from four symphoniaASSAI musicians to explore and expand their collaboration beyond the symphonic frame. Since then the quartet has been performing regularly in Belgium and other European countries, such as Germany and the Netherlands. Each concert represents a unique experience, bringing together the four members’ profound commitment and unceasing motivation for sharing the wonders of chamber music through the distinctive sound of four cellos.

Koen Berger, Helena Fuertes, Johanna Peiler and Shuya Tanaka found each other through cello playing and together they combine the character and qualities of four different nationalities: Belgian, Spanish, German, and Japanese. Passionate about music in general and the cello in particular, the members of the ASSAI cello quartet want to share their enthusiasm and energy not only through orchestral playing, but also through this very particular chamber ensemble. The quartet’s motivation to interact with all audiences enhances their approach to performing, teaching and mentoring. The four members are active as music educators and they enjoy working with young cellists as a quartet, projecting the empathy and connectivity of chamber music as an example of communication that we should strive for.

With the particular versatility of a formation with four equal instruments, the ASSAI cello quartet focuses on pieces originally written for the ensemble (like the beautiful Légende et Danses by J. Jongen or the Concert-Walzer by W. Fitzenhagen) alongside new transcriptions and contemporary works: a vibrant combination of the familiar and the daring. In keeping its mission of supporting the creation of invigorating new repertoire while using thematic and innovative programming, the quartet often collaborates with living composers and arrangers from Belgium and abroad. Among the transcriptions written for the quartet are Biem van Hoften’s wonderful versions of La Valse by M. Ravel and The old castle and Baba Yaga from the Pictures at an exhibition by M. Mussorgsky. A strong advocate for contemporary music, the quartet has premiered a number of new compositions in the last years, such as Scherzo by A. Charlton (2017), Switch by J. Sporck (2019) and Telesthesia by R. Cameron-Wolfe (2019).