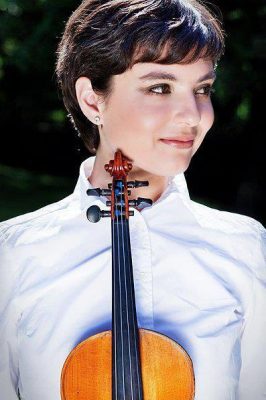 “Praised for her “playing with passion” (The Boston Globe), violinist Olga Caceànova has made a name for herself as „a self-assured performer with great poise”, as described by leading critics.

Her repertoire ranges from baroque and classical to new commissions. Having a great interest in new music, Olga will be performing numerous newly written compositions written especially for her. She has a great affinity towards her Romanian roots that vitalize her interpretations up to the point that once made The Boston Musical Intelligencer write: “Make a bee-line to the venue…if you see Caceanova’s name on a billboard or in a calendar!”

Olga has also worked with John Corigliano and chamber orchestra  ” Kremlin” on his piece ” Red Violin Suite” which has been played in many concert halls in the US.

Born in Chisinau ( Moldova), Olga studied with Donald Weilerstein at the New England Conservatory of Music in Boston (USA).

Olga owns a violin by Gulbrand Enger , circa 1874 ( Copenhagen, Paris), plays a G.B.Guadagnini violin generously provided by a private benefactor and a Cuniot-Hury bow ( France)